Menu
Log in
Install the app
You are using an out of date browser. It may not display this or other websites correctly.
You should upgrade or use an alternative browser.

Username(s) of the accused
sgreen

Value of property in dispute
100

He was delayed to start the character, meant to begin on 6/1, began actually on 6/2. 6/4 I get a screenshot on Discord of a level 28 monk with some high value items he "got for me" such as a smoldering brand, fbss, etc. I praised his work, and let him do his thing without bothering him. It had been about 4 days later before I started asking for an update since we were past the time quoted.

Well he stopped responding to me - nothing on here or discord. I logged into the toon who was 28, 4 days prior, was still 28 and now with the items of value on the account removed.

Please put this out to the community as it looks from his threads like others also have the same experience.
Last edited: Jun 9, 2022 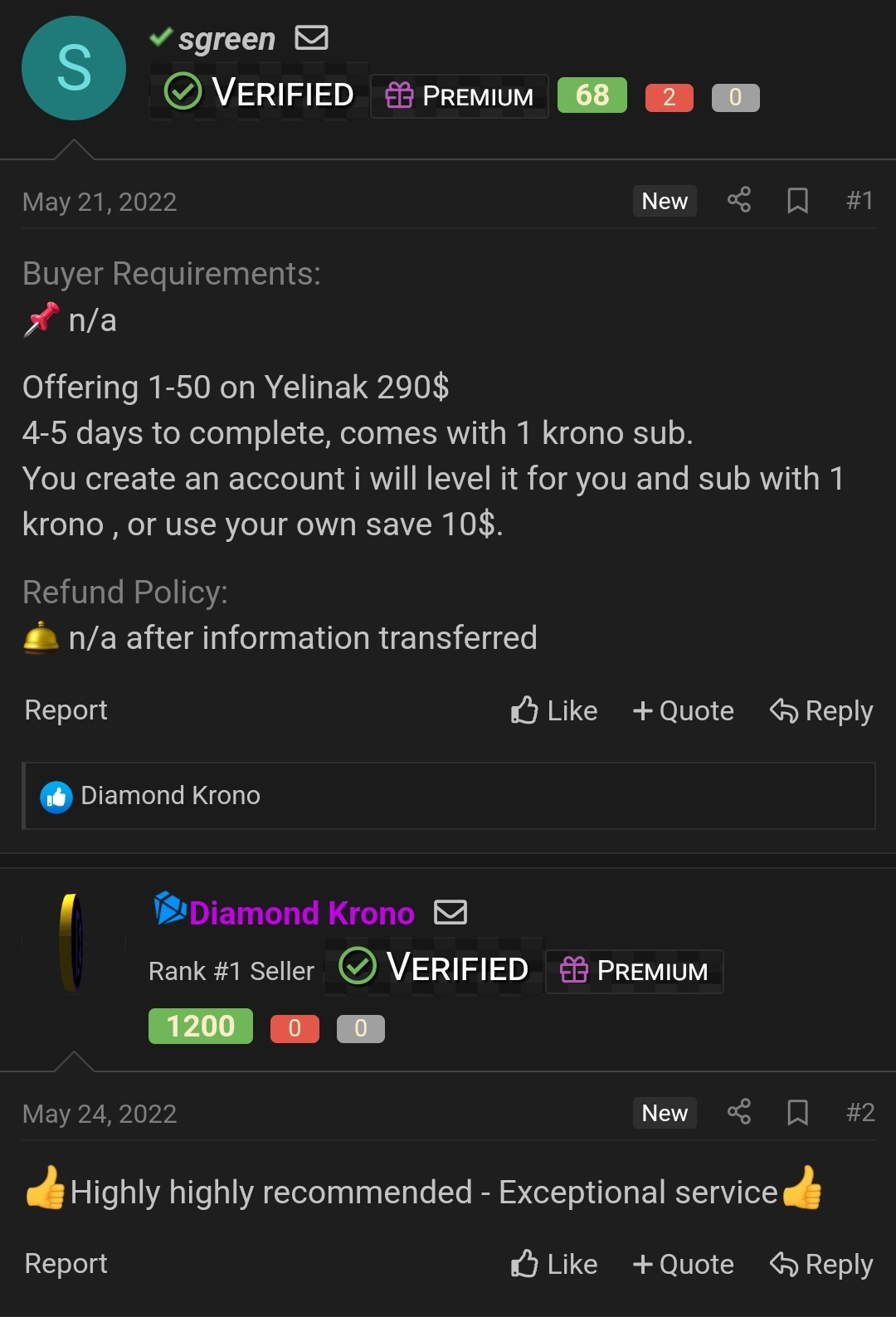 So I did get my toon to level, but haven't seen him since June 6. He did however claim to have to hit the ER/Hospital (May 29), so take this for what it's worth.
M

Rating - 100%
14   0   0
I'm experiencing the same issue, paid $150 for 25-50 which he estimated to have completed by yesterday. The character was never leveled however he did put a few boxes on the account and a couple items. Very surprised as I didn't get the scammer vibe from him especially with the amount of feedback he had.

Rating - 100%
19   0   0
To be clear in my case, the items he had placed on the account (ex: fbss, smoldering brand) were items negotiated to be paid for in addition to the $290 I sent him for 1-50 (have chat snaps to prove from discord). After 4 days of no leveling (4-5 day guarantee), no communication, items of value removed and a post by another member about the same person, I can't come to any other conclusion.

Do you mean you did not pay for those items so technically they are his?

If that's the case, aside from krono disappearing off another account above, perhaps it is a misunderstanding / rl issue?

Rating - 100%
19   0   0
Yes you are correct in my case, the two items I listed were going to be paid for as an additional offering beyond the $290 I had already paid him, so those were technically his. In reading the above reports, it's concerning to hear krono and other things belonging to people were taken.

Rating - 94.4%
33   2   1
I texted his verification # and he replied back within minutes that he's having some issues and will respond in time, and will honor/refund anyone having issues.

I recommend everyone stay cautious, if you hired sgreen please change the passwords on your accounts / emails ASAP. If you can, try and get your money back from your bank/credit card.
Last edited: Jun 9, 2022
H

My last message to them basically said basically obviously something has gone wrong and I just wanted a sense of how long it may take or if I can negotiate a partial refund. Glad you heard from them )
N

Needsomekrono said:
I finally was able to check, the krono were there so that’s my mistake. I only wasn’t power leveled, and I’m sorry for my mistake.
Click to expand...

Thank you for the update.

I still recommend everyone dealing with sgreen change their EQ account's PW and try as hard as they can to recover their money. If you need any information, please contact me privately.
Last edited: Jun 10, 2022
M

Rating - 98.8%
81   1   0
I think it's crazy that @sgreen took cash (aka an actual transaction was made), not followed through, and, furthermore, a lack of communication has been evident for these folks! Everybody has a cellphone these days, at the very least. I truly hope you guys find some resolution or peace with this matter.
Last edited: Jun 14, 2022

I truly am so sorry that this happened to you all and I pray that there is some justice done for you all; at the very least, @sgreen returns the money for services PROMISED, but NOT RENDERED! Mind blowing!
Last edited: Jun 14, 2022

There is a thread selection called "Rant" If you would like to open up a thread about something unrelated to this transaction.

Facts are facts. @sgreen posted 4-5 days. It's been almost a week. Facts don't lie DK. Either @sgreen can or can't provide services PROMISED.

And it's an integrity issue. @sgreen should refund the players' money @sgreen promised services to; especially when @sgreen ADVERTISED it undercutting other players offering similar services.
Last edited: Jun 14, 2022

Needsomekrono said:
I finally was able to check, the krono were there so that’s my mistake. I only wasn’t power leveled, and I’m sorry for my mistake.
Click to expand...

If this dude is scamming, is he only scamming a little bit or what Lol? That is a part of why I say there is no way to know until we know.

Take the customers perspective, who we assume feels "Ripped off"
They probably want the best chance they get their refund, which does not include insulting them.

-Saying "Facts are facts" "he hasn't been online for 4-5 days" doesn't mean anything, his airplane could have crashed into a volcano.
-Whether or not he undercut anyone does not add or negate from this situation. It is perfectly reasonable to provide services cheaper than another seller.

I'm neither defending or attacking him. Outside of Redbot who has had texts with him, there is no way with our current knowledge to justify giving an explanation. I wouldn't begin to throw around accusations because I don't know, making a judgment would be only out of assumption.
I choose not to throw stones unless I know what I'm throwing at.

Likelihood, yeah probably a scam. What if it isn't though? Or what if it was a scam and he is remorseful and wants to pay it back? Or finish the leveling?

The customers who hope to get their money back want the best possible chance at reparation, this would certainly not include insulting him publicly, or using the situation as a vehicle to push an agenda over matters that do not concern the issue at hand.

Imagine this guy get's into a car wreck, goes to refund, reads a thread about how inconsiderate he is for someone else running a red light.. That money is going towards the hospital bill baby.

And why didn't he snag the krono? Just felt 90% scammy? Kind of weird is all.

I love this right here. There is only ONE like on @sgreen 's post. Only one person who is talking about a Krono exchange; however, the complaints here are about @sgreen 's POWERLEVELING scam, in which there has been NO RESPONSE, no FINISHED jobs, nothing. I don't care what the problem is here, a simple call text or refund fixes ALL THESE PROBLEMS. However, @sgreen has failed to respond or refund their money for services @sgreen PROMISED TO DELIVER ON in 4-5 days, PERIOD. There is no excuse, you either do or you don't. In which case, you give the refunds, so they can pay someone that WILL ACTUALLY FOLLOW THROUGH and/or UP with their services!

p.s.-- IMAGINE hoping to play with your friends in 4-5 days because you paid @sgreen for it, then sitting and hoping you get your money back from @sgreen DAYS beyond that, THEN imagine not hearing from @sgreen who has your money and is not powerleveling nor issuing a refund, then imagine not having a toon to play on that @sgreen promised you with said service or funds.
Last edited: Jun 14, 2022

Then laughing about it with an emoji because you think it's funny people got scammed.

@halelan , @agates1999 , @Needsomekrono , @Midnytte , @fivehourenergy ... I am still hoping you guys see your money returned here. This is a tragedy for you and the community when people do this!
Last edited: Jun 14, 2022 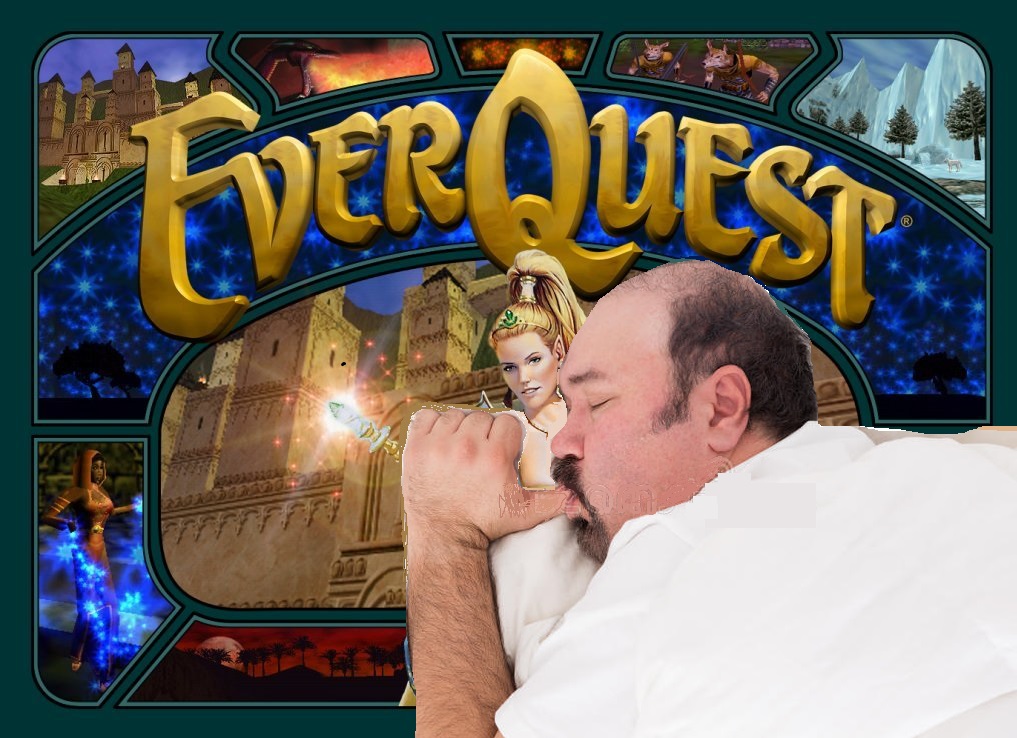 Midnytte said:
It looks like the was online today and still has not responded to anyone. Not looking good for refunds.
Click to expand...

Truly sorry to read this.

Diamond Krono said:
Yeah, that doesn't look so good.. But maybe his pw was auto-fill and his dog stepped on the enter key.

Is making jokes about something this serious lightening your mood @Diamond Krono or are you just not at all concerned about the investments these people made into an empty promise? Would you as a seller do this to anyone? I just don't get the memes and jokes that are diluting the serious matter at hand here.

Rating - 100%
540   0   0
I like how FreEQ2PlaySales is talking shit about this guy when the guy left him negative feedback.
You should probably keep your speculations/opinions about someone you already have beef with canned unless you want to comment on your experiences with the seller.

Not defending sgreen, just saying that FreEQ2PlaySales opinion is obviously biased and doesn't belong on this thread.

Rating - 98.8%
81   1   0
I share experiences with this group. And I care about the customers that allow us to do what we do on this thread! If that's bias, I'm guilty. There were at least 5 CUSTOMERS here who were affected and I believe it should be resolved in THEIR favor. If that's bias, then I'm guilty. Period.
You must log in or register to reply here.

Users who are viewing this thread